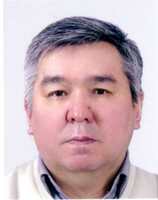 In 1984 he graduated from the Kyrgyz State University named after 50th anniversary of the USSR, Department of Hydrometeorology of the Faculty of Geography. The diploma thesis was on «Analysis of factors conditioned modern regime of glaciers of the northern slope of the Terskei Ala-Too ridge». He completed postgraduate course in the National Academy of Science of KR and defended PhD thesis on «Glaciation of the Tien-Shan, its modern state, evolution and geochemistry» by specialty 25.00.23–physical geography and biogeography, soil geography and landscape geochemistry.

After graduating from the university he worked in the Hydrometeorological Service of KR. From 1990 to 1992 he had been working in the State Committee for Nature Protection of KR – in the Issyk-Kul Oblast Committee on Environmental Protection and Interregional Ecological Research Service Center.

Over many years of expedition-field works he had observed a number of glaciers in the West, North, Inner and Central Tien-Shan and Issyk-Kul depressions, as well as glacier systems of the Turkestan and Alai ridges. He worked as acting head of the expedition working group; and on the new area of study within glaciology of the Tien-Shan – geochemistry. The research results are represented in the different scientific publications and reports. He published more than 40 scientific papers, both in publishing houses in Kyrgyzstan, and foreign. He participated in the different conferences, symposiums and workshops on modern glaciations, hydrology and climate of mountainous areas; and provided his work results as well.

Joint cooperation in the field of research with the specialists from some institutes of NAS KR, universities and other profiling organizations in KR, e.g. during several years he had been conducting joint research of exogenous processes and outburst-hazard mountain lakes in the northern part of Kyrgyzstan with the specialists from the Kyrgyz Complex Hydro-Geological Expedition under the State Geological Agency KR. He worked in the field of science-education at schools and universities in KR and he is a co-supervisor of PhD student and applicants.

Working in the projects:

Within the Institute of Geology of NAS KR he worked in different international joint projects as one of the principal executors: the project of MES KR (2006) – «Engineering-geological research of landslide areas of a scale 1:100 000, with creating electronic database and activities on risk reduction in Kyrgyzstan (in the Chui oblast)»; 2001-2003 - project of the International Research-Technology Center «Studying the climate change in the Tien-Shan mountainous areas on the basis of annual glacier layers composition; 2005-2006 – Kyrgyz-Czech project «Monitoring of the mountainous glacial lakes and protecting people from hazardous consequences of flooding, resulting from moraine dams’ break»; in CAIAG project «Global Change Observatory in Central Asia», «Water in Central Asia» etc.

Cooperation in the field of research both with the scientists from Kyrgyzstan, and scientists-glaciologists of foreign countries.

2004-2007 – chairman of the Trade-union committee of the Institute of Geology NAS KR.

2009 – chairman of the State Certification Committee in the universities of KR in the field of geography and geoecology.

The main publications over the last 5 years: