Monitoring changes and field studies on the Abramov, Golubin, Suek, glaciers of the Atbashi Range and glaciers in the basin of the Bartang River in Tajikistan

In 2017-18, in the framework of the project “Study of representative glaciers of Kyrgyzstan”, research of glaciers Abramov, Golubin, Enylchek, Western Suek, No. 354, No. 599 and No. 178 is ongoing, using interpreting Landsat 8 and other satellite images and field measurements of ablation and mass balance. Within the IKI EbA project (Ecosystem Adaptation to Climate Change in the Highlands of Central Asia), similar work is underway in the basin of the Bash-Kaindy River on the northern slope of the Atbashi Ridge, where ablation rods are set on the glacier No. 182; the boundaries of the glacier tongue are defined. As for glaciers of Tajikistan, an analysis of their changes based on the interpretation of space images was performed.

The interim results within the IKI EbA project are published on: http://www.caiag.kg/ru/struktura-otdely/otdel-2/publikatsii-2-go-otdela/ (Usubaliev R., Mandychev A., Osmonov A., Kalashnikova O., Shabunin A., Azisov E., Esenaman M., Podrezova Yu. Report on the results of works for 2016-17 under the EBA project "Adaptation to climate change based on the ecosystem approach in the highlands of Central Asia". (CAIAG), 2018. 52 p.). 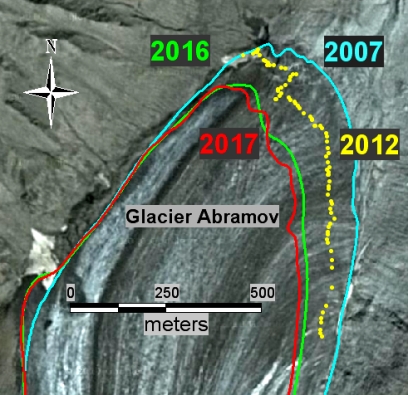 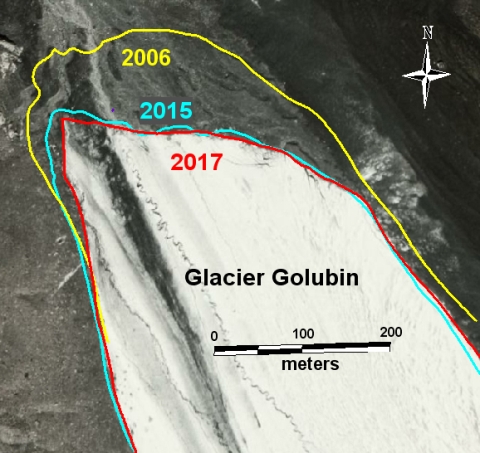 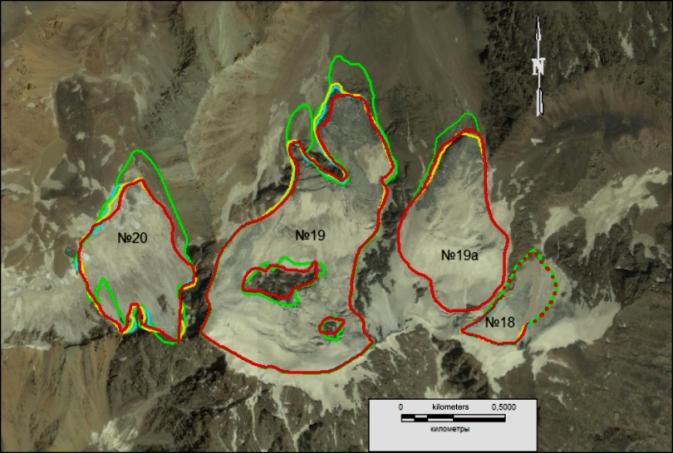 In 2017-18, the research continued under the Global Observatory of Central Asia program on the Enilchek glacier, at the Merzbacher high-altitude scientific station. In summer, new ablation rods were set and ablation measurements were taken on the Southern Enilchek Glacier. In addition, the glacier’s surface velocity was measured by rods displacement during the year. 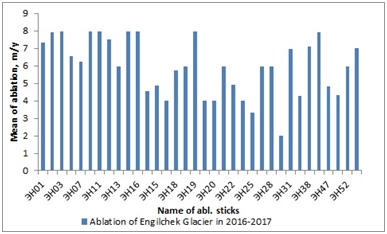 The ablation value on the Southern Enylchek Glacier for 2016-17.

In 2018, work on interpreting glaciers on the northern slope of the Teskey Ala-Too Ridge using the "Landsat TM" (1990) and 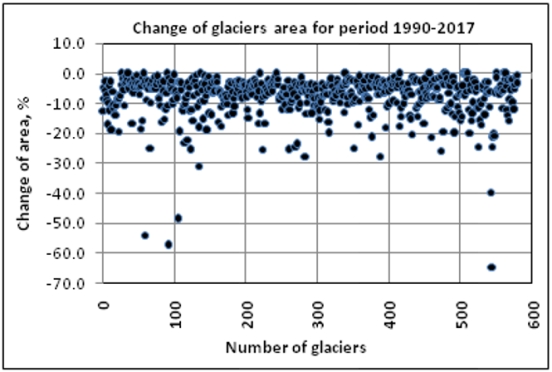 Catalogue of Glaciers of Kyrgyzstan

In the framework of case studies in 2018, the Catalog of Glaciers of Kyrgyzstan was published: http://www.caiag.kg/ru/struktura-otdely/otdel-2/publikatsii-2-go-otdela/ (Shabunin A. Catalog of Glaciers of Kyrgyzstan (CAIAG), Bishkek, 2018). In this catalog, the state of glaciation as of 2013-16 and its change since the preparation of the Catalogue of Glaciers of the USSR (CGUSSR) in the 70s of the 20th century is shown based on the interpretation of the Landsat 8 satellite images and on comparison with the CGUSSR. 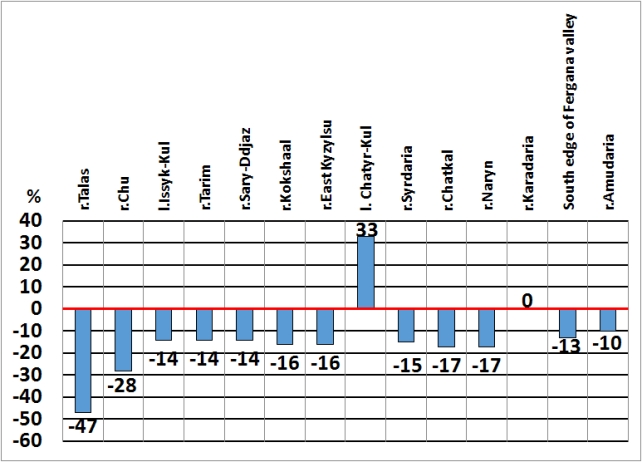 In 2017-28, the types of feeding and cyclicity of the maximum runoff on the rivers of the Issyk-Kul basin were studied. 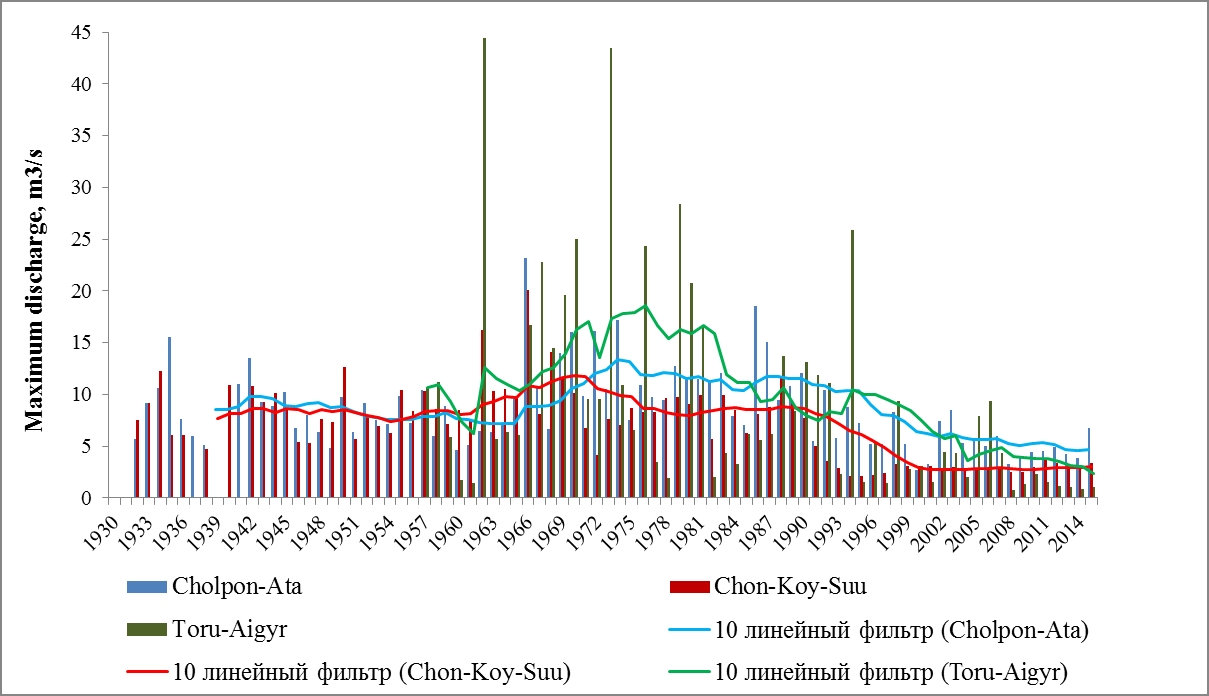 The maximum water discharge on the rivers of the southern slope of the Kungey Ala-Too Ridge. 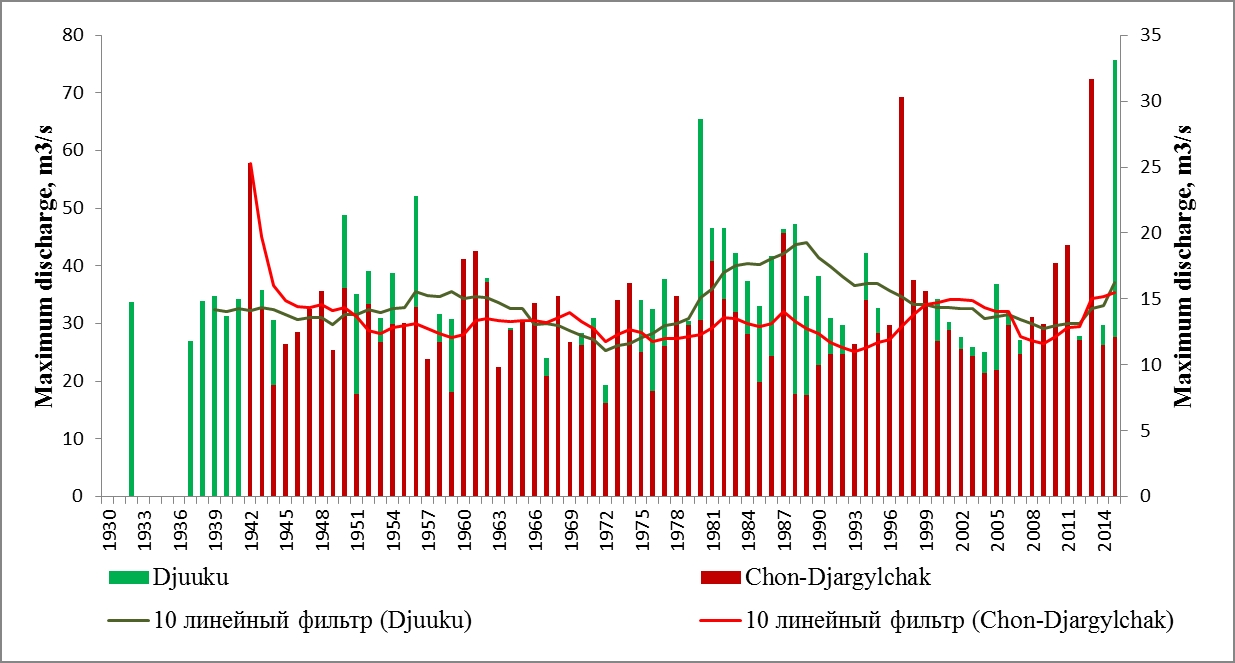 Maximum water discharge in the rivers of the northern slope of the Teskey Ala-Too Ridge.

Hydrological modeling was also compiled in the framework of the CAWa project (Long-term forecast of Central Asian rivers runoff based on snow cover data from MODIS images); work on the project GlaSCA-V (Dynamics of runoff in the upper reaches of the Chu River in the past and the future. Evaluation of the of rain, thawed snow and glacial runoff contribution to the overall runoff of the upper reaches of the Chu River) is ongoing.

The methods proposed for forecasting seasonal runoff in the summer months have correlation coefficients (R) of 0.50-0.92, and the accuracy of the forecasts for the period 2000-2017 is 77-100%. 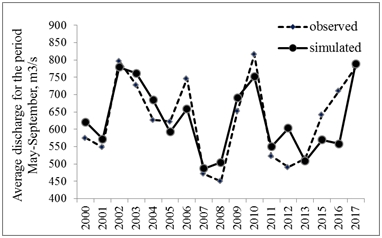 Monitoring the Level of the Issyk-Kul Lake

Observation of the topography of the Issyk-Kul Lake level along the tracks of the CRYOSAT 2 altimetry satellite is ongoing in different years and seasons of the year. The results indicate a lake level decrease in the central part. This phenomenon, in our opinion, due to its permanence and independence from seasonal changes in hydrological conditions, is caused by gravitational attraction of two sublatitudinal ridges - the Teskey and Kungei. To a lesser degree, the deflection of the lake level may be due to the anticyclonic circulation of the lake water, as well as the temperature and salt variations in the water density. 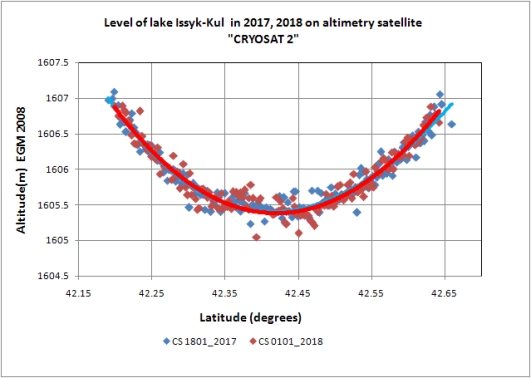 Monitoring Oil Pollution Movement in the Town of Balykchy

In 2017, samples of groundwater in the coastal part of Lake Issyk-Kul and directly from the lake were taken in the area of ​​groundwater contamination with oil products in the town of Balykchy, in the area of ​​the operating oil depot. One sample (No. 257) of lake water and two samples (No. 258,259) of groundwater were taken. Groundwater samples were taken from a one-meter hole. Analyzes were performed by a Fluorat-02-3M fluid analyzer in the laboratory of the Environmental Monitoring Department of the State Agency for Environmental Protection and Forestry under the Government of the Kyrgyz Republic. Petroleum products were found in the water samples, but their concentration of 0.05-0.06 mg/l meets the MPC (maximum permissible concentration). 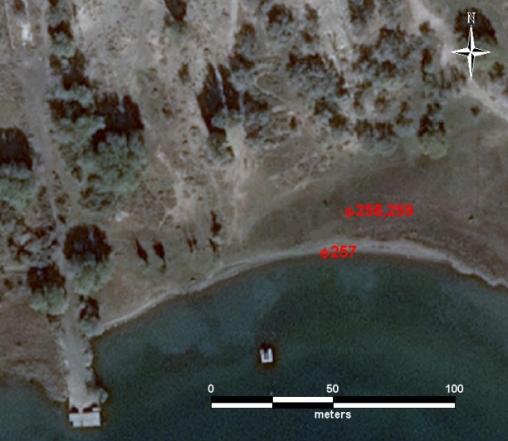 Location of water sampling points from the lake and groundwater

In 2018, monitoring of groundwater level and temperature continued with OTT_ecoLog_500 sensor installed in well No. 1301-4, which belongs to the observation network of regime wells of the Kyrgyz Complex Hydrogeological Expedition of the Ministry of Natural Resources of the KR (KCHE). The measured parameters (temperature and depth) are stored every hour and transmitted via the cellular GSM network to CAIAG server. One can obtain this data and see the graph of the groundwater level change at: (http://gdbweb.caiag.kg/WATER/index.php). Well No. 1301-4, located in Kyrgyzstan on the western outskirts of Bishkek (42 ° 52'1.06 "C 74 ° 28'50.31" B, the absolute elevation is 739 m). View Well No. 1301-4 on a larger map.

In 2018, Ott Orpheus Mini water level sensor was installed in well №1089 of the KCHE which is located like №1301-4 well, in Bishkek, within the Alaarcha groundwater deposit. The depth of the well is 59 m, land elevation is 778 m. 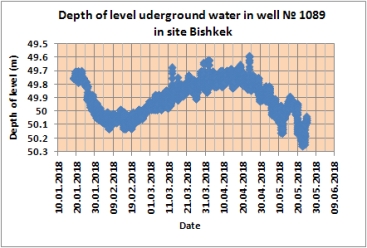 Measurement of Meteorological and Hydrological Parameters

During the project EbA (Adaptation based on ecosystems to climate change in the highlands of Central Asia) in 2017, in Kyrgyzstan (village Bash-Kaindy) and Tajikistan (village Hijez), CAIAG researchers set automatic weather stations, which transmit the main meteorological parameters to CAIAG through the cellular network. 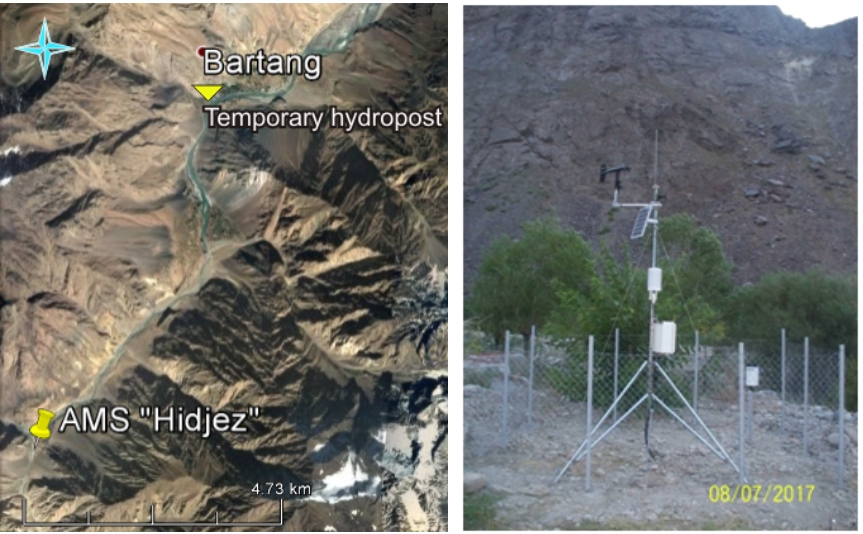 In May 2018, an automatic gauging station was installed in the Bash-Kaindy River using Ott Mini Orpheus sensor, which measures the change in the level and temperature of the river water and stores data in the data logger. 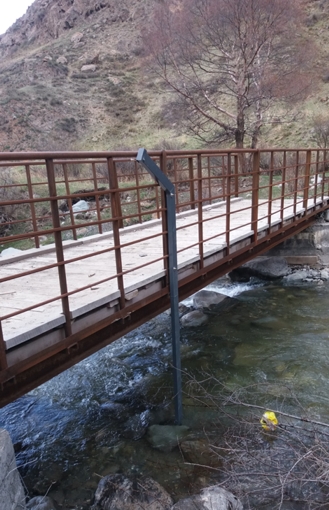