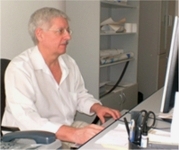 1997 - 2000 under the contract of the Ministry on Emergency situations of the Kyrgyz Republic carried out researches on studying and prevention of the processes of bogging and underflooding of the settlements on the territory of Kyrgyzstan.

Since 2006 - head of the second department «Climate, water and geoecology » in the Kyrgyz-German Central - Asian Institute for Applied Geosciences.  During scientific activity executed researches in the field of hydrodynamics, hydrogeochemical, hydrogeothermal of underground waters of deep horizons (thermal - mineral waters), and  researches on interrelation of superficial and underground waters, including isotope method (isotopes of uranium234/238), mode of levels of underground waters, estimation of size of their resources and rational use in basins of Kyrgyzstan.He has created and uses for the publication of scientific papers website in the Internet (http://www.geohydro.narod.ru/).
In honour of the 45 anniversary of formation of the  National Academy of Sciences of the Kyrgyz Republic is awarded with the honourable letter for the achieving high results in development of scientific researches in the field of hydrogeology.

Participation in international projects:
In 1999-2000 under the grant ISTC (KR-330d) carried out preparation of the project on theme: "Studying of water balance and hydrodynamics of the lake Issyk-Kul by isotope methods".
In 2000 -2001 participation in ecological research on uranium pollution in area of the Kadji-Say settlement in the project APELIK (COPERNICUS-2).

Now, except of organizational and scientific - methodical activity, carries out researches in the field of development of methods of the forecast of variability of climatic, hydrological and hydro-geological processes in territory of Kyrgyzstan. These researches are based on the analysis of long-term rows of supervision, procedures of smoothing of average long-term parameters and interpretation of results in light of representations about of non-uniform periodic, essentially casual oscillatory processes in an atmosphere and hydrosphere.