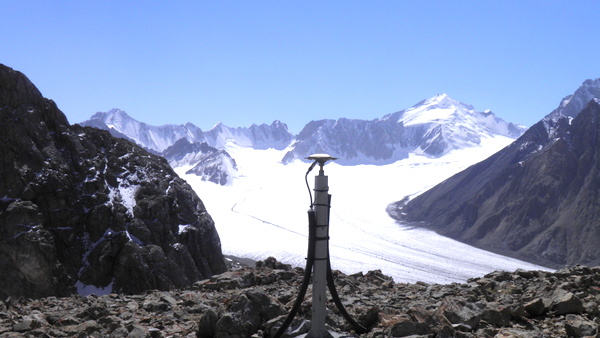 At present, the GNSS network of the CAIAG includes 30 permanent stations located in Kyrgyzstan (25), Uzbekistan (3), Tajikistan (1) and Afghanistan (1). Some of them are part of more powerful complex stations such as ROMPS, where besides GNSS receivers there is also a set of different meteorological sensors. In some cases, seismic stations and hydrological equipment are connected to the ROMPS stations. Another part of the GNSS network is made up of single GNSS stations, some of them were subsequently added with small weather stations VAISALA. All stations are automatic, stand-alone and unattended. Depending on the location of the stations and the amount of data from them, the data transmission is carried out either via the Internet, or the VSAT satellite system, or mobile communications. For groups of stations located a short distance in line of sight from each other, a radio modem data transfer from one station to another is organized with an exit to the main station with the VSAT satellite system. All data is collected automatically via the Internet, satellite and mobile communications. Processing of daily data is performed automatically by the Gamit / Globk programs.

Now the GNSS network performs, basically, 2 tasks. The first of these is the regional monitoring of changes in the speed of tectonic movements of the Earth's crust in Central Asia. Basically, ROMPS stations, concentrated in the region, are engaged in this. Another task is to study the rate of deformation of the earth's surface of small areas, including tectonic faults, landslide slopes or glaciers.

For a long time, CAIAG together with Section 1.2 of the GFZ, conducts observations on the Enilchek glacier near Lake Merzbacher, where one GNSS station is installed. The peculiarity of the lake is that it usually breaks once a year, as a result of which all the water from the lake goes under the ice dam and further downstream of the Enilchek River to China. The speed of the Southern Enilchek glacier is approximately 100 m per year in the direction of Lake Merzbacher. And during the breakthrough, the dam rises to 10-20 m. 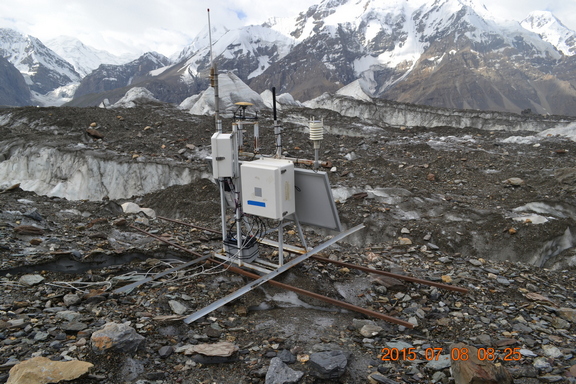 To study the movement on the faults, the Alai Valley of Kyrgyzstan is chosen, where the Tien Shan is pushed to the Pamir. Here one of the largest relative movements in Central Asia is observed - more than 10 mm / year. In 2013, in the western part of the valley, along the meridian of the Altyn-Dara River, a profile of 4 GNSS stations was installed, of which the northern station is located on the Tien Shan rooters, and the southern one is located at the indigenous outcrops of the Pamirs. In 2015, another 3 stations were added to this profile, the southernmost of which is located in the town of Alty-Mazar near the southernmost tip of Kyrgyzstan on the border with Tajikistan. Another 3 new stations are installed in the east of the Alai Valley along the profile of the settlement of Sary-Tash. 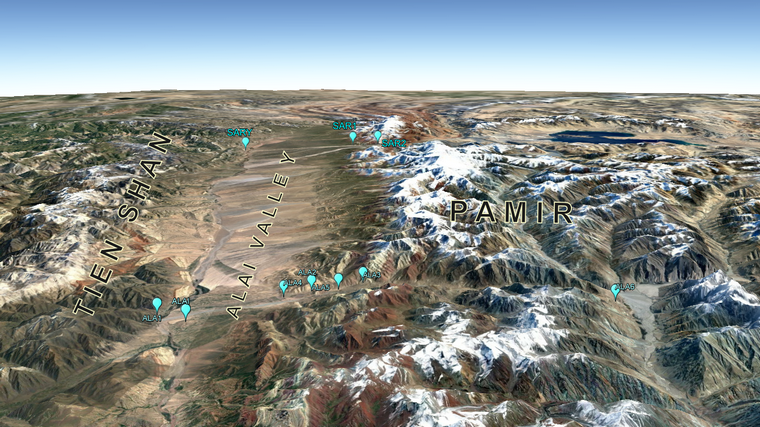