The Normalized Vegetation Index (NDVI) is a standardized index showing the presence and condition of vegetation (relative biomass). This index uses the contrast of two bands from multispectral raster data.

Chlorophyll (a health indicator) strongly absorbs visible light (Red), and the cellular structure of leaves strongly reflects near infrared light (NIR). When the plant becomes dehydrated, diseased, diseased, etc., the spongy layer breaks down and the plant absorbs more near infrared light rather than reflecting it. Thus, observing how the NIR changes compared to red light gives an accurate indication of the presence of chlorophyll, which correlates with plant health.

The NDVI is often used around the world to monitor drought, forecast agricultural production, assist in predicting fire zones, and offensive desert maps. NDVI is preferred for global vegetation monitoring as it helps compensate for changes in lighting conditions, surface slope, exposure, and other external factors.

The default NDVI equation is:

According to this formula, the density of vegetation (NDVI) at a certain point in the image is equal to the difference between the intensities of reflected light in the red and infrared ranges, divided by the sum of these intensities. 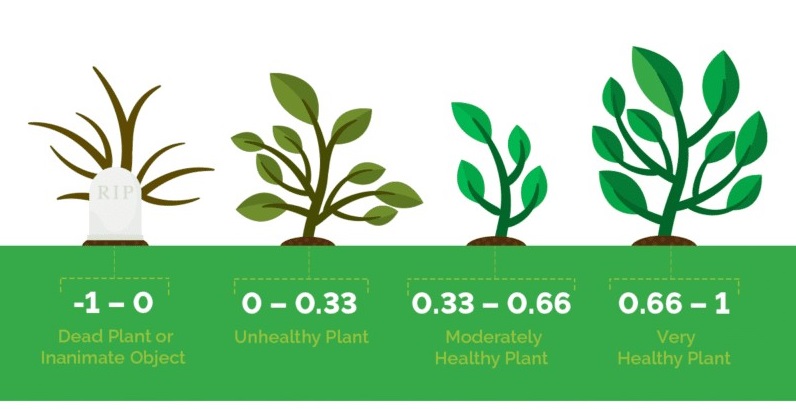 The Pasture Biomass product is the conversion of NDVI data to pasture biomass in kg/ha using an equation obtained comparing NDVI with ground measurement data. This should only be considered as an indication of the amount of pasture biomass that is present on the ground.

Using the Snow Mask product, the Snow Percentage product gives an estimation of the percentage of snow in a pixel for the time period considered. For example, if the snow percentage is 50, it means that there was snow for 50% of the time.

The Standardized Differential Snow Cover Index (NDSI) is designed to use MODIS data (channels 4 and 6) and Landsat TM (channels 2 and 5) to identify snow cover while ignoring cloud cover. Since it is ratio-based, it also reduces atmospheric effects.

The atmosphere is transparent to both Green and SWIR, while snow absorbs SWIR and reflects Green strongly. This allows for good separation of most clouds and snow.

Snow cover is as bright as clouds, making it difficult to differentiate from cloud cover. However, at a wavelength of 1.6 mm (SWIR), snow absorbs sunlight and therefore appears darker than clouds. This makes it possible to effectively distinguish between clouds and snow cover. Thus, the image demonstrates the ability to separate clouds from snow using observations at these wavelengths.

The Normalized Differential Drought Index (NDDI) is a combination of NDVI (Vegetation) and NDWI (Water Content) and is used to determine the level of drought in a particular area.
The index scales from -∞ to ∞, with low positive values indicating no drought and high positive values indicating drought conditions. Negative values usually indicate areas that do not correspond to grassland due to a negative NDVI or NDWI value.

NIR - near infrared range with wavelengths in the range of 0.841 - 0.876 nm;
SWIR is part of the wavelength range in the 1.628-1652 nm range.
The functionality of the formula explains the following parameters: it uses short-wave near infrared radiation (SWIR), in which light is absorbed by water (a wider range of 1500-1750 nm is possible). Using the same Near Infrared Range (NIR) as water does not absorb this part of the electromagnetic effect, a Weather Resistant Index that distinguishes it from NDVI. It should be noted that when observing forests, the NDWI index is characterized by a more stable decrease in values ​​when the critical anthropogenic load is reached, which can serve as an indicator of the ecological state of forests that are more sensitive than NDVI.

Vegetation cover on the Earth's surface is exposed to severe stress during drought. Damaged areas at the wrong time. Early detection of water scarcity can prevent negative impacts on crops. Remote sensing of land and NDWI can manage irrigation in real time, greatly improved agriculture, especially in areas where water satisfaction is difficult. 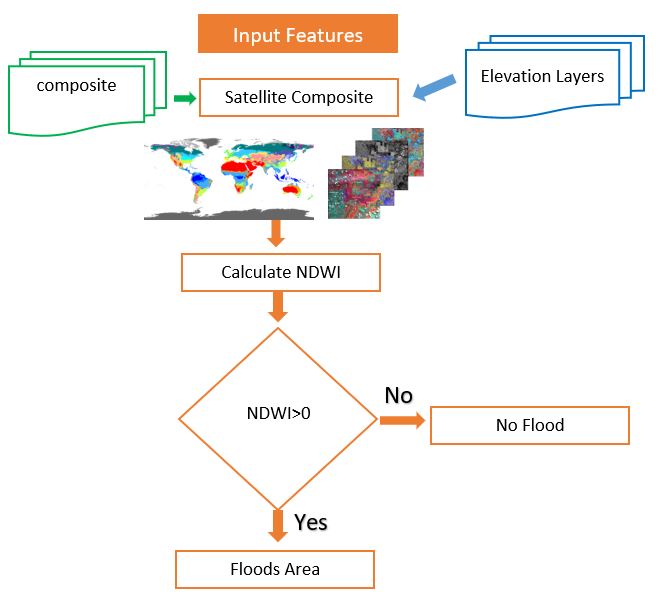 The Vegetation Health Index (VHI) combines the TCI and VCI to create a drought index which uses information both about the vegetation levels and temperature.

The Vegetation Condition Index (VCI) is an indicator of the current status of the vegetation relative to the historical values.
VCI values range from 0 to 1, reflecting changes in vegetation conditions, from dry to wet. For VCI greater than 0.7 the vegetation is in good condition, values between 0.3 and 0.7 reflect moisture conditions close to normal, while values less than 0.3 signal that vegetation is in a stress state or drought condition.